I hope, some of you who open my daily blogs regularly are able to divert your thoughts from the routine and wander elsewhere, not necessarily peeping through the windows I'm trying to open before you by providing randomly chosen links from the internet.
Quite a lot of interaction is happening in the RBI Retiree groups these days on a variety of topics. More responses are landing in our inbox. We have more options. Music, magic, spirituality, spirit and it's marketing and taxation, health, higiene, poverty, pension, income tax, mythology, movies, books, tourist spots, government finance, banking, poetry, astrology and predictions, expanding universe, happenings deep under the sea, how pearls are formed, where the nation's wealth is hidden, quiz, puzzles and pure gossips...

A. Corruption and other vices:

Who's earning bad name for professions and communities, just think for a while.

👇 Copied below is an excerpt from a message received in my inbox yesterday:

"One day a florist went to a barber for a haircut.
After the cut, he asked about his bill, and the barber replied, 'I cannot accept money from you, I'm doing community service this week.

The florist was pleased and left the shop.

When the barber went to open his shop the next morning, there was a 'Thank You' card and a dozen roses waiting for him at his door.

Later, a grocer comes in for a haircut, and when he tried to pay his bill, the barber again replied, 'I cannot accept money from you , I'm doing community service this week.

The grocer was happy and left the shop.

The next morning when the barber went to open up, there was a 'Thank You' card and a bag of fresh vegetables waiting for him at his door.

Then a politician came in for a haircut, and when he went to pay his bill, the barber again replied, 'I cannot accept money from you. I'm doing community service this week.

The politician was very happy and left the shop.

The next morning, when the barber went to open up,
there were a dozen politicians lined up waiting for a free haircut."

I've purposely omitted the troller's conclusion from the text I received. Perceptions can differ. Greed and corruption are two sides of the same coin. And, these days, I agree, a coin has more than two sides.
I feel the blame for the present state of affairs of the world should be shared by all of us, in different measures, not equally.
1) The workers who didn't fight for their rights. Even today, they foolishly trust the rich and the powerful to give them fair wage.

3) Voters world over, who didn't bother what the representative they elected were doing between elections.

4) Hoarders who accumulated unaccounted assets. A story of Arjuna and Karna being taken to a mountain by Krishna, one day early morning, is in circulation. Krishna told Arjuna: Today, I'll convert this mountain into GOLD for you. It'll remain gold till sunset. YOU DO WHAT YOU DO. (Remember Dr Rajan). Arjuna started breaking pieces of gold and accumulating. One hour before sunset, as Arjuna had collected only a few bags of gold. The whole mountain was shining in bright sun. Krishna asked Arjuna to stop working. Gave the same offer to Karna. By the time, the entire population of the country had reached to watch the miracle of the mountain turned gold. Once entrusted by Krishna the task of appropriating the mountain of gold, Karna went to the top of the mountain and had a prayerful glance at his father (Sun). Sun coming out of a cloud blessed his son by a wink. Karna got the message and announced to the people of the country:
"This gold belongs to the nation. All of you come and collect your share"
The entire gold was shared by the people.
Sun had another blessing glance at his son and called it a day.
Moral of the story : "24,000 Tons of gold in India was of no use in the 1991 forex crisis. Only the 7 tons carried to UK and pledged was of help."

5) Why I should exclude me? The employees in the organised sector (government and public sector included) who remained silent when others insulted by alleging that they were a burden on taxpayers, as if they were being paid "unemployment doles". Reality was that salaries (remuneration for work done) classified under that head under Income Tax Act were being paid only after extracting each month's work.
And pension. The concept that pension is "deferred wage" has been forgotten.
In my own organization, I have heard that friends of some trade union leaders had to beg with some politician or the other for a partial rectification of injustice in calculation of pension that was perpetuated for decades. Inefficient leadership at all levels.
Until every citizen recognizes the rights, duties, justice and injustice, we will keep blaming God and "Politicians" as they think they can negotiate with Gods.

The list is illustrative.
We'll discuss in the coming days.

B. Copied below is an article on Currency Management by Vivek Kaul finalised on May 8, 2020) captioned:

"Should the RBI print money to revive the economy? It’s not as simple as it sounds!" 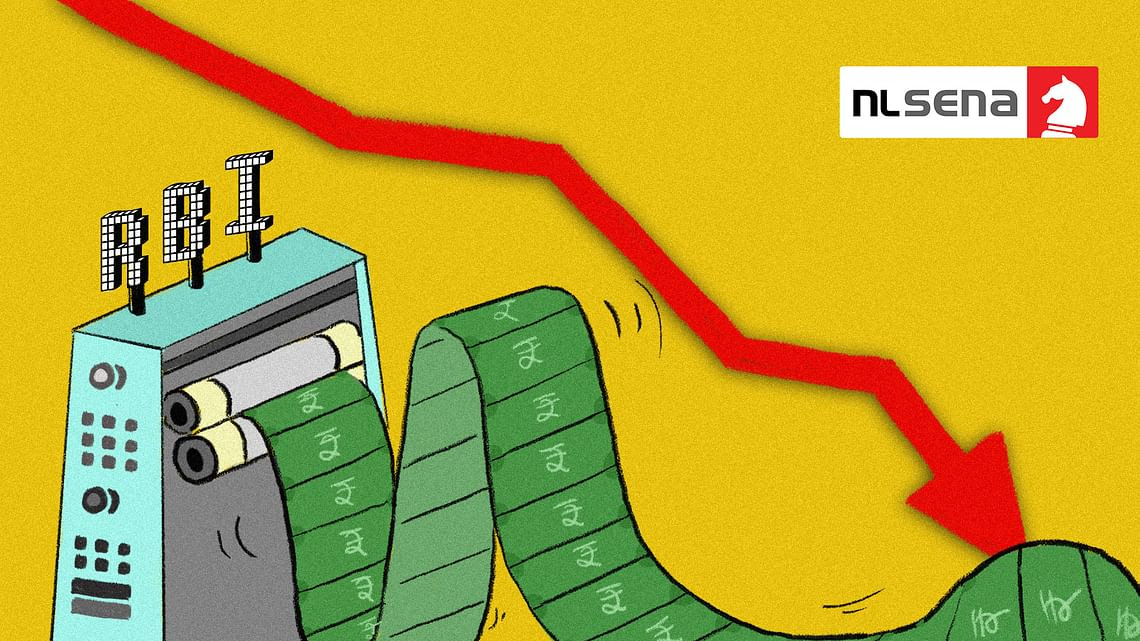 THE ECONOMICS OF POST-COVID INDIA

Should the RBI print money to revive the economy? It’s not as simple as it sounds

Nuance makes the overall argument for printing money less desirable and difficult to sell, both to the press and to the government.
Vivek Kaul Published on :May 8, 2020, 3:54 PM

2) Manu S Pillai responded to my mail with focus on "History of Kerala"*:
"Many thanks! And shall read the article :)

*This was in response to my personal mail copied below :

Congratulations and Best Wishes for your efforts to show Kerala's heritage in right perspective through your writings.
As I have mentioned your name in my message** to my friends today, copying the content below. When free, have a glance.

Also attached is my article on RBI being published in the current issue of The Global ANALYST which may be of interest to you.
Nice Day
Yours Sincerely

Popular posts from this blog

January 29, 2019
NAVAGRAHA STOTRAM* According to astrology, the positions of the nine planets in the twelve constellations of the zodiac and their movements are considered to be quite significant. The nine planets ‘Navagraha’ affect every aspect of human life. They play an important role in the activities, physical and mental health and life of any individual. The unfavorable positioning of any of these planets can be the cause of problems, bad health, and stagnation for many people. However, there is a solution to avoid the ill effects of the position and movement of the ‘Navagraha’ in our lives. Navagraha mantras (or stotram) are simple mantras which work as powerful healing tools to reduce the negative effects of any of the nine planets. These mantras are Hindu holy hymn addressing the nine planets. Benefits Of Navagraha Stotram And The Way to Practice The Navagraha Stotram is written b y Rishi Vyasa and is considered to be the peace mantra for the nine planets. They are powerful m
Read more

October 31, 2019
'His Masters Voice' (HMV) had once published a pamphlet giving the history of gramophone record. Gramophone was invented by Thomas Alva Edison in the 19th century. Edison, who had invented many other gadgets like electric light and the motion picture camera, had become a legend even in his own time. When he invented the gramophone record, which could record human voice for posterity, he wanted to record the voice of an eminent scholar on his first piece. For that he chose Prof. Max Muller of England (a German by ethnicity), another great personality of the 19th century. He wrote to Max Muller saying, “I want to meet you and record your voice. When should I come?” Max Muller who had great respect for Edison asked him to come on a suitable time when most of the scholars of the Europe would be gathering in England.  Accordingly, Edison took a ship and went to England. He was introduced to the audience. All cheered Edison’s presence. Later
Read more

November 11, 2021
Welcome to Warrier's COLLAGE On Thursday November 11, 2021 Agre Pashyami... https://youtu.be/KUffn-CXm98 (P Leela : Narayaneeyam) Good Morning Nice Day M G Warrier A Current Affairs 1) Media Response To The Editor The Hindu Letters November 10, 2021 Consensus on legislative proceedings The legislative bodies in India, top to bottom, from parliament to panchayats have become notorious for mismanagement of working hours. On several occasions, there is continuous disruption of official proceedings, sometimes affecting scheduled business for weeks. A solution to this malady will be dependent on an all party consensus on regulated and disciplined functioning of legislatures. In both houses of parliament and several state assemblies, pre-lunch walkouts by opposition members have become a regular affair. Arguments for, include attracting media attention and creating public awareness about social and economic issues, where immediate legislative/government action is co
Read more